The Safeguarding and Preservation Plan (PSMV) was elaborated to solve this issue.

The PSVM is both a legal and an operational tool. Its adds to the existing legislation a finer knowledge of the site, and thus facilitate its management. This inventory is not limited to a snapshot of the city, but extends to social and cultural rules and incentives. It also identifies cultural and natural heritage beyond architectural heritage. 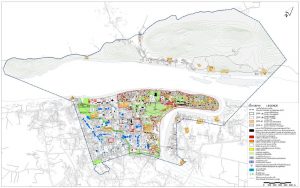 The final safeguarding and preservation plan for Luang Prabang is comprised of four volumes: