Home About Us International Cooperation Projects The wetlands restoration program

The World Heritage Site includes the « wetlands », a network of waterways and ponds dug by the people of Luang Prabang during the 19th century.

The owners of the ponds still use them to this day as water gardens, where fish are farmed and vegetables grown. These ponds are fed by the waterways and the inflow of water from the side ponds. The vegetation that thrives amidst these complex water networks forms a major part of the green zones, in the very heart of the town.

The wetlands not only contribute by providing an economic and scenic factor, but they also play an important role in the urban environment:

Nevertheless, an inappropriate use of these networks and the unsustainable increase in pollution (be it human or household waste) is creating a sanitation problem and constitutes a potential threat to human health.

The Maison du Patrimoine has therefore set up a program for the « protection and enhancement of the wetlands ». The aims of this program are to protect the wetlands, which play an important social and economic role (marsh cultivation and fish farming), and to tackle the poor local sanitary conditions. This project, supported by the European Commission, has been implemented by MDP up to 2001.

Stretched over a period of three years, the program includes a phase of study of the wetlands (mapping of water networks and sanitation networks; a topographic study; and analysis of the variation in water quality), initiatives to improve public awareness of the issues at stake and the establishment of a public fund to improve sanitation.

At this stage, it is too early to measure whether the results have a significant city-wide impact of the flow of pollution, but the improvement in the sanitary conditions of the public buildings and the maintenance of open spaces in the city Centre, have gradually brought the population to see the wetlands environment in a new light.

The map of the wetlands 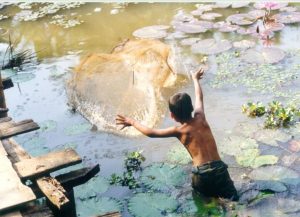 Fishing in the wetlands